A Finnish Piper living at the National Theater 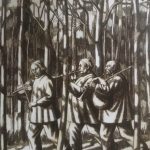 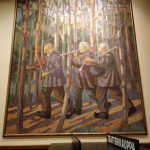 Patrik Weckman, a recent member of our growing Finnish piper’s network, has brought to our attention an interesting artwork by the painter Juho Rissanen (1873-1950).

In picture 1 – “Kolme soittajaa” (Three players) – the 1928 sketch intended as a study for the future National theater’s fresco, produced that same year (picture 2). On the whole it portrays the centuries old tradition of “Helkajuhla” or Helka feast in Sääksmäki Ritvala village in the Tavast province. The festivity is still held nowadays. It happens in early summer and displays characteristics that range from paganism to catholic prayer processions. Young girls will procession through the village singing old runo-songs with medieval themes. The meaning: to ensure the fertility of the village fields

In the fresco, one can clearly see a fiddle player, a woodwind player (Unlikely a horn, but whether flute or reed instrument is to be determined), and clearly a Piper. The observer’s perspective of both the fiddle and the woodwind are partially obstructed by trees in the foreground. However, the bagpipe is unobstructed and clearly visible. The bagpipe may clearly be identified as a mouth blown, single drone instrument, with a conical chanter. Both the chanter and the drone have very pronounced bell like ending. We may guess with a fair certainty that the drone ends with a closed bottom, hollow resonator. We cannot identify if the drone is being used in the “fully closed” position or if it lacks tuning slides.
At first glance it appears to be a single piece drone, which would naturally prevent the piper for comfortably tune the drone. This would not be unlike other ancient world bagpipes, where the piper is forced to rely on tuning the reed exclusively. On the other hand, as often is the case in bagpipe iconography, we cannot be certain of the author’s familiarity with all the subtleties and details of piping. However, Patrik tells us of other sketches of other pipers, made by the same author while living abroad. In this example the painter gives us hints that he knows full well what he is depicting – Please notice that both piper and woodwind player are making identical cross-fingerings, which adds to the authenticity of what Rissanen is depicting.
Curiously enough, both the fiddler player and the woodwind player appear to be left-handed. Could that be for purely visual composition reasons? Or was the artist depicting Finnish musicians he actually knew? By putting ourselves in the roles of pipers, bagpipe makers, and visual artists, we are inclined to believe the authenticity of what Rissanen is portraying.
The elephant is the room is that, once again, we are left with the depiction of a “conical system” bagpipe in Finland, like the previous already know 3 iconography (please see our blog article on the state of the art of bagpipes in Finland).
As intriguing as this may be, we are not impressed – Most people are aware that iconography models migrate from country to country, subject to the fashion trends of each époque. The artist was born in Kuopio Savolax, lived many years in France and Italy, before dying in the USA. So far, we are of the opinion that most certainly this bagpipe is drawn out of the author’s body of work, from bagpipes he had already sketched in Bretagne.

“So? what is the fuzz? Case closed!” – the reader would say!

Well, what moves Patrik Weckman to continue his inquiries on the subject is the following research question: “- Why? Why would the painter include bagpipes in such a nationalistic charged artistic work?” “- Yes!” – Patrik continues, “- Maybe he got his inspiration from France especially from Bretagne where he also lived. But why put it in this kind of work in Finland?” He is inquiring further into the life of the painter and this peculiar work of art, and writing an article to be published in Finnish language. He has kindly authorized us to translate it here to English language after the Finnish publication, in order to reach a much wider audience. Open citizen inquiries are bound to promote discussion and further discoveries into the field of bagpipes and woodwinds in Finland.

We are extremely happy that Patrik is asking such thought-provoking questions, and look forward to his article. Thank you Please keep up the good work, and keep us posted!

* We would like to acknowledge and join Patrik in thanking Marianna Huttunen, chief curator at the Kuopio Art Museum, for the valuable details about this case.